The Flag in Front of My House 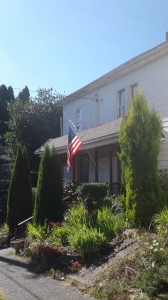 Today is the 4th of July, and in honor of this, I have posted the flag of the United States on my porch.  And why would I do this?  Because of my love for the country which has done so much good for the world.  Yes, I know that the country isn’t perfect, and at all times in its history, it has needed and still needs improvement.  But can you name a country of which this couldn’t be said?  The fact is, this country has become the greatest country upon the face of the earth, and not because it has sought to conquer other lands, but because it has defended the freedom of all men.  Its efforts have not always been successful, and sometimes it has acted incorrectly, but what would the world be like if there had never been a United States?  The answer to this is that the world would have been a much worse place.

In his inauguration speech in 1961, President John F. Kennedy admonished the citizens of this great country, to “Ask not what your country can do for you – ask what you can do for your country!” For over 150 years my family has been following the principle behind this admonition.

My great-great grandfather Christian Frederick Stoltzman (1839-1901) immigrated to this country from Germany around about 1864, settling in Richview, Illinois.  This was during the US Civil War, and since he had expressed his intent to become a US citizen this made him subject to call-up for military service.  He was subsequently called up for service in the Union Army, as a member of the 8th Illinois Infantry Regiment.  He fought in several battles while his regiment was a part of the XVI Corps of the Army of West Mississippi (commanded at the time by Major General Edward Canby), and participated in the last major battle of the Civil War, the Battle of Fort Blakely, Alabama.

My great grandfather John Adams Clark (1868-1947) was born in a United States which treated its aboriginal inhabitants, the “Indians”, quite poorly.  As a half-white, half-Konkow Indian man, he faced prejudice and some disadvantages as a result.  He nevertheless recognized that he was better off here than anywhere else.  In 1898, he was working in his occupation as a mineral prospector in California, when he heard that the United States had declared war on Spain (the Spanish-American War).  He immediately dropped what he was doing, hiked out of the hills to the nearest place of military enlistment, and signed up.  As a private in the 8th California Volunteer Infantry Regiment (Company G), he never faced hostile fire, but he freely put his life into the hands of his country, not for personal advantage but because he loved it.

John named his only son, Canby Adams Clark (1901-1942), after U.S. Army General Edward Canby, who was the only US general officer killed during the Indian Wars.  When a young man, Canby joined the US Navy and served as a Pharmacist’s Mate for six years during the period between the World Wars, serving aboard numerous ships, including the repair ship USS Vestal.  Years after he was honorably discharged from the US Navy, he was working as a well-paid steamfitter when the Japanese attacked Pearl Harbor, an attack which seriously damaged his old ship, the Vestal, which was moored next to the battleship USS Arizona at the time.  In the days after Pearl Harbor, the now 40-year old Canby tried to re-enlist in the Navy but was refused due to his age.  Being thus unable to serve his country directly, like his father before him he left his occupation and took a lesser paying job as a welder at Todd Shipyards in Long Beach, California, helping to build ships for the US Navy.  In May 1942, while engaged in the construction of the USS Ajax, another repair ship, he suffered a heart attack and died.  The Ajax went on to serve the United States in the Pacific Ocean during World War II, once even serving alongside Canby’s old ship, the Vestal, during the Marianas campaign.

Canby’s only child, Donald Lee Clark (1930-1976), was only 12 when his father died, but his father’s and grandfather’s examples led him to seek to serve his country also – and as soon as he could possibly do so, when he finally convinced his mother to give permission for him to join the US Marine Corps at the tender age of 17.  He spent three years of his life as a “Leatherneck”, and his service as a high-speed radio operator (Morse code) saw him sailing with the US Navy’s Sixth Fleet in the Mediterranean Sea.  A few years after his honorable discharge in 1950, Donald again served the country in the US Air Force Reserve, again as a radio operator.

Donald’s two sons, my brother Mark and I, also followed the flag, myself in the US Army for eight years, and Mark in the US Air Force for ten.

The flag in front of my house symbolizes for me the great love which my family has had for this country, and the great blessing which living under its government has been to us.  Long may that flag wave over this great land, and long may the freedoms, which that flag symbolizes, endure upon the earth.

This entry was posted in Family, Politics. Bookmark the permalink.