As I mentioned in my last post, I was attending a Microsoft Event called Windows Phone 7 Jump Start.  That was yesterday and the day before, now, and having dragged my sorry self back home last night late.  I say “sorry self” because the drive out of Redmond was a PIG — I should have waited until 8 pm to leave, because the traffic on the 520, even at 6 pm was horrible.  Just getting on the darned freeway was frustrating, and I spent a half hour going a mile.  I got off and took a surface street south to Bellevue, where I stopped at a Dairy Queen, got something to eat, and then rejoined I-405 South from I-90.  Traffic there was much more comfortable — by this time, it was merely “heavy” as opposed to “bumper to bumper”.  By the time I got home (at 9:30 pm) I was ready for bed.  Well, enough complaining.

The Jump Start was excellent.  I was already enthusiastic about this platform, and all I can say now is Hallelujah!  This is going to be cool!

I didn’t actually expect to run into Paul Thurrott while on the Microsoft Campus, and he reports that they had him roped in pretty tight in his examination of the Windows Phone 7 device he came here to examine for his book, Windows Phone 7 Secrets.  In fact, “…they very specifically kept me away from the Windows Phone Jumpstart (or any other human interaction).*”  I guess I know why, and that would be that if he were to say something inadvertantly to any of us (I know I would have loved to talk with him, just in general), none of us were under NDA, and that would have meant that we had basically free rein to blab all about what he had just told us.  I used to be in the Army with a Secret clearance, so I understand all about security.  Loose lips sink ships, and all that.  Or in this case, loose lips talking about capabilities that might not be fully developed could cause all kinds of industry expectations to be disappointed in case they don’t make it to the final product.  I think Microsoft has learned a good lesson from past mistakes in this area!

By the way, I suggest having a listen to the current Windows Weekly podcast, since Paul and Leo Laporte do talk about Paul’s experience at Microsoft this week, to the extent he is permitted by his Non-disclosure Agreement (NDA)!  It’s a great show this week, but I do have a bit of consternation over one thing that Paul said.

About 13:30 into the podcast, Paul said that developers would be able to add their own Hubs (if you don’t know what that is, look down  this post a bit), but that specific question was asked at the Jump Start and though they said that developers would be able to enhance the built-in Hubs with their apps, the answer the question of adding Hubs was: “Nope.”   Maybe there’s a matter of the left hand not knowing what the right hand is doing, but there seems to be a slight contradiction here.  Paul indicated that a more advanced version of the toolkit would make it possible, but the Jump Start team did not make that qualification. 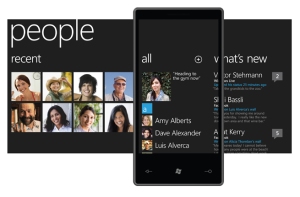 One of Ms Foley’s “risks” with regard to Windows Phone 7 was that Microsoft’s older Windows Mobile 6.5 users weren’t going to find their apps working on the new system, and I’ve actually heard worries being expressed about Microsoft’s new emphasis on the consumer at the expense of the business user in the new system.

Windows Phone 7 is going to be huge.  Business users benefit greatly from Windows itself being available in private homes, and not just in the office, because this enlarges the market considerably, and makes for a larger ecosystem of development companies.  The exact same thing will make Windows Phone 7 a much better environment for business users than Windows Mobile ever was.  There were about 50 developers, from all parts of the country, who showed up on VERY short notice (a few weeks) to the Windows Phone 7 Jump Start, and when they asked how many of us were planning to develop apps for the WP7 system, virtually all hands went up.

I have this “feeling” about Windows Phone 7.  And that feeling is that the naysayers are absolutely out to lunch.  When this mobile operating system ships, it is going to get big really quickly.  And a large part of that is going to be the number of apps that will be available when it ships.

And I’ll be doing my part to make this happen, believe me.

The “big boys” will be working overtime porting their Windows Mobile 6.5 (and earlier) apps to the Windows Phone 7.  For one thing, they have LOTS of time to do it!  If they can’t find the time between now and “Holiday 2010” then they deserve to fail.  Big time.  I’ve been looking at the development tools for WP7, and I can tell you there is nothing better under the sun.  I’m repeating myself from an earlier post, but it bears repeating.  And if you can’t re-tool, well then, can you call yourself a developer?  I don’t think so.

And for those Visual Basic developers who are afraid of C# (wusses), the word from the Jump Start was: Visual Basic will be coming to WP7.  Eventually.  They couldn’t commit to a schedule on that, but the general feeling they conveyed was that the VB team was working towards it with some degree of feverishness.

This entry was posted in Windows Phone 7 Development. Bookmark the permalink.